Diagnosis of Poisoning in Living and Dead 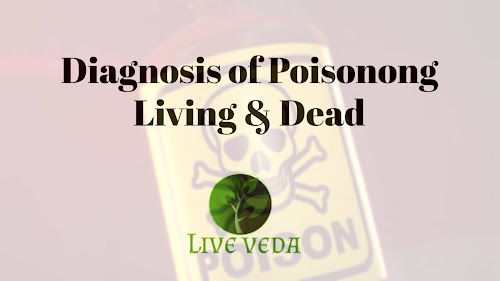 Poisoning may be suicidal, homicidal or accidental, and a definite history of the ingestion or contact with a known poisonous substance may or may not be available. Therefore, the possibility of poisoning should always be considered in a puzzling situation when differential diagnosis presents a difficult problem. Accordingly, it is essential that one should be familiar with outstanding symptoms and signs of poisoning in the living persons together with its effects as found in the examination of dead.

1. Diagnosis of Poison in the Living

1. The symptoms appear suddenly in a healthy person.
2. Proper history taking may be difficult in homicidal or suicidal cases.
3. Sudden onset of symptoms after meals in the previously healthy individual and gradual increase in severity of symptoms point out to positive  diagnosis.
4. Other family members if affected uniformly
5. Detection of poison can be attempted in stool according to poison used.
e.g  : - corrosive poisons leave external marks
- Irritants produces cholera like symptoms
- Spinal poisons stimulate convolusions etc
6. A strong evidence in favour of poisoning is the detection of the poison in the food , medicine, vomit, urine or faeces, Therefore, in all the suspected cases of poisoning these samples must be sent for chemical analysis to the laboratory.

1. Symptoms are exaggerated after the administration of suspected food,fluid or medicine.
2. Malaise, cachexia, depression and gradual deterioration of general condition of patient is seen.
3. Repeated attacks of diarrhoea. vomiting, etc .., are seen .
4. Traces of poison may be found in urine and stool.

2. Diagnosis of Poison in dead

The detailed history of the quantity and quality of the poison administered can be understood as per onset, and the time passed between the intake of the poison and development of symptoms, the duration of illness, the treatment given and  the time of death.
The following consideration should be made into account :
A) Postmortem examination
B) Chemical Examination of viscera
C) Experiment in animals
D) Collection of oral and circumstantial evidence.
A) Postmortem Examination
i) External Examination :
- Stains or marks of vomitus, faeces and stools
- Colour of postmortem lividity, certain poisons impart characteristic colouration for example :
Phosphorous - Yellowish or brownish
Cyanide - Brick red
Carbon monoxide - Cherry red.
- Condition of pupils and hands if relaxed or clenched.
- Odour, especially around the mouth and the nose, which can be explained in following table
ii) Internal Examination :
- Odour
- Examination of G.I tract - Redness in mucus membrane
B) Chemical Examination of Viscera
- Collection of viscera
- Preservatives for the Viscera and Body Fluids
It is useful for diagnosing and suspecting poison in the patient either alive or dead.
In living patient the foods, drinks, Vomitus, urine, faeces and other should be sent for chemical analysis
In dead individuals, following parts or substances should be sent -
1. Skin, hair, nails, bones, teeth etc
2. Materials found in stomach, intestines etc
3. Urine and faeces
Presence of poison in parenchyme is considered a vital sign in diagnosing of poison.
C) Animal Experimentation for detection of poison
Food particles, medicines,vomitus etc. of patient of suspected poisoning is fed to dogs,cats and other domesticated animals. These animals are also affected by the poison in the same manner. Therefore, the animals are fed with the suspected articles and the signs are closely observed. Similarity of signs of humans and animals confirms the poisoning.
But it should be noted that some animals are immune to certain poisonous substances e.g. pigeon is not affected by opium and similarly rabbit is immune to amonium.
Also certain poisons affect certain animals in unique way; e.g. datura and belladona cause prolanged dialation of pipils(for week) in cats.
D) Collection of oral and circumstantial evidence
Such evidence may consists of motive, the evidence or witness about the recent purchase of the poison, his behavior before and after the committing of the offense, and the recovery of the poison from the possession of the accused.

Duties of Medical Practitioner in Case of Suspected Poisoning

The duties are two -
1) Medical - Care and treatment of the patient.
2) Legal - Assist the police to determine the manner of death.
a) Note preliminary particulars of the patient, i.e.., age, sex, address, date and time, identification marks etc,
b) In case of suspected homicidal poisoning, the doctor must confirm his suspicion before expressing his opinion.
For this the doctor must :
i) Collection of vomitus and urine, and should submit for analysis some part of the content should also be preserved in his custody.
ii) Carefully observe and record the symptoms in relation to food, in case it is food poisoning organisation from a public eatery (canteen, cafe,hotel, etc), the public authorities must be notified.
iii) The opinion of another doctor is worthwhile.
iv) Wherever possible the case should be shifted to the hospital.
v) The doctor should keep detailed records of the number of his visits, the symptoms and signs observed and treatment given time to time.
c)Once the suspicious are confirmed, he should request the shifting of the patient to the hospital. If the victim is an adult who retains his mental faculties, it might be desirable to speak to him about the steps to be taken.
d) Noncompliance is punishable under S.201, I.P.C if it is proved that the doctor did with the intention of protecting the accused.
e) If a private practitioner is convinced that patient is suffering from homicidal poisoning, he is bound under S.39,Cr.P.C to inform the police officer or Magistrate. Non-compliance is punishable under S.176, I.P.C
f) If he is sure that patient is suffering from suicidal poisoning, he is not bound to inform the police, Since S.309 of the I.P.C is not included in the section of the I.P.C for which information has to be given under S.39, Cr.P.C.
g) If the practitioner is summoned by the investigating police officer, he is bound to give all information regarding the case has to come to his notice under S.175, Cr.P.C he conceals the information, he is liable to be prosecuted under s.202, I.P.C If he gives false information , he is liable to be charged with the offense of giving false information under S.193, I.P.C
h) A government medical officer is required to report to police all the cases of suspected poisoning.
i) If the condition of the patient is serious, he must arrange to record dying declaration.
j) If the patient dies, he should not issue a death certificate, but he should inform the police.