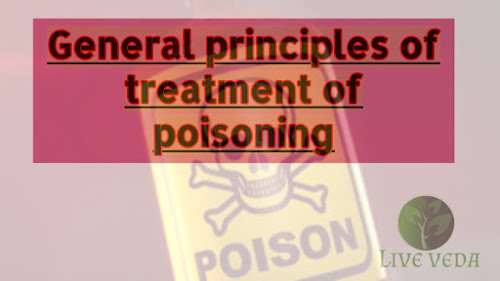 The basic principles of treatment of poisoning are

A) Prevention of further exposure to the poison

B) Removal of unabsorbed poison

C) Diluting the poison and delaying its absorption

E) Use of antidote

A) Prevention of further exposure to the poison

This is mainly useful in the inhaled and injected poison.
If the poison is been given by inhalation, then remove the patient from that atmosphere , begin artificial respiration (avoid mouth to mouth resuscitation as far as possible), administer oxygen, if there is severe bronchospasm, administer the broncho-dialators, if there is pulmonary edema, give diuretics like furosemide(40mg) or corticosteroids like hydrocortisone(100mg IV 6 hours) e.g in CO poisoning.
In some cases where the poison has been introduced by a subcutaneous injection or by a bite an immediate ligature, ice cold pack or sucking could prevent the absorption of poison.
Washing with water is useful where the poison has been introduced into vagina, rectum or urinary bladder. However if the the nature of the poison is known a specific solvent could prove to be more useful.
B) Removal of Unabsorbed poison (Decontamination) -
Since most of the poisons are ingested , decontamination is usually achieved by evacuation of the stomach. This is done either by inducing emesis (vomiting) or by performing a stomach wash (gastric cleavage).
1) Emesis -
This must be attempted only in the conscious and alert patient. Due to the danger of inhaling gastric contents, vomiting should only be induced when a conscious patient is lying on his side with head dependent. the methods are :
a) put the finger in the mouth and tickle the posterior wall of pharynx. This is one of the best method.
b) As a first aid useful household emetics -
- Drink copious amount of warm water.
- A table spoonful of of mustard powder in a tumbler(200ml) of warm water.
- Two table spoonful of sodium chloride in warm water produce emesis.
c) Zinc sulphate 20-30 grains in 4 ozs of water.
d) 20-30 grains of Ipecacuanha (root of small shrub - Cephalis ipecacuanha and Cephalis acuminda, grows well in West bengal, It contains Cephaeline and Emetine active principles) dissolved in water.
e) Copper sulphate 5-10 grains in one oz. of water. This is never to be used in Arsenic poisoning because cupric arsenic is formed which is more harmful than arsenic itself.
f) Apomorphine injected 1/20 to 1/10 grains subcutaneously acts as a centrally acting emetic. The effect comes in 3 or 4 minutes. An important side effect which could be dangerous to the patient in cardiac irregularity, this should be countered by injection Nalorphine and Inj. Atrophine.
Contraindications to emesis -

This is useful in ingestion type of poisoning. If the patient has ingested a life threatening amount of poison, then it should be removed by gastric lavage with 1:5000 potassium permanganate solution etc with the help of ryle's tube. It should be done only within one hour of the ingestion otherwise it make the situation worse by pushing unabsorbed poison into the small intestine.
- Unabsorbed poison from the intestine should be removed by purgatives and colonic lavage.
- Unabsorbed poison from the site of injection (e.g. in snake bite etc) should be removed by placing ligature proximal to the site of injection and the poison is squeezed/sucked out by doing multiple incisions in and around the site of injection.
C) Diluting the poison and delaying its absorption
The poison in the stomach is diluted by giving water and bulky food, which also helps in delaying its absorption.
D)  Removal of absorbed poison
Absorbed poison can be excreted from the body in following ways-
a) Diuresis - by increasing urination with help of excessive fluids and diuretics eg. Frusemide 60-100 mg IV which can be repeated after two hours if required.
b) Diaphoresis - by increased perspiration with Neostigmine methyl sulphate in dosage of  0.5 to2 mg subcutaneously or intramuscularly.
c) Dialysis - Dialysis is the effective method to remove absorbed poison if kidneys are not functioning properly.
E) Use of Antidote
Antidotes are substances which counteracts the action of poison by neutralizing them or by producing signs and symptoms opposite to those produced by the poison.
Ex : Neostigmine for datura, barbiturate for strychnine etc.
Universal Antidote - Universal antidote with the following constituents is given when exact nature of the poison is not known -
Chelating agents - Chelating agents are used as antidotes against heavy metals due to their greater affinity for them. They form chelate with the metallic poisons available freely in the circulation and help in early excretion from the body. For example-
i) BAL (British anti-lewisite, dimercaprol) in the dosage of 3 mg per kg I.M 4 hourly for first 2 days, 6 hourly on third day and 12 hourly for about 10 days.
ii) EDTA ( Ethylene diamine tetra acetic acid) in the dosage of 1gm twice a day I.V slowly over a period of an hour (mixed with 5% glucose saline)
F) Symptomatic treatment
Rest of the treatment is a symptomatic for example- morphine for pain, artificial respiration for respiratory failure, cardiac stimulants for circulatory collapse and diazepam for convolusions.