The female reproductive system is a complicated but fascinating subject. It has the capability to function intimately with nearly every other body system for the purpose of reproduction.

The female reproductive organs can be subdivided into the internal and external genitalia (see the images below). The internal genitalia are those organs that are within the true pelvis. These include the vagina, uterus, cervix, uterine tubes (oviducts or fallopian tubes), and ovaries. The external genitalia lie outside the true pelvis. These include the perineum, mons pubis, clitoris, urethral (urinary) meatus, labia majora and minora, vestibule, greater vestibular (Bartholin) glands, Skene glands, and periurethral area. 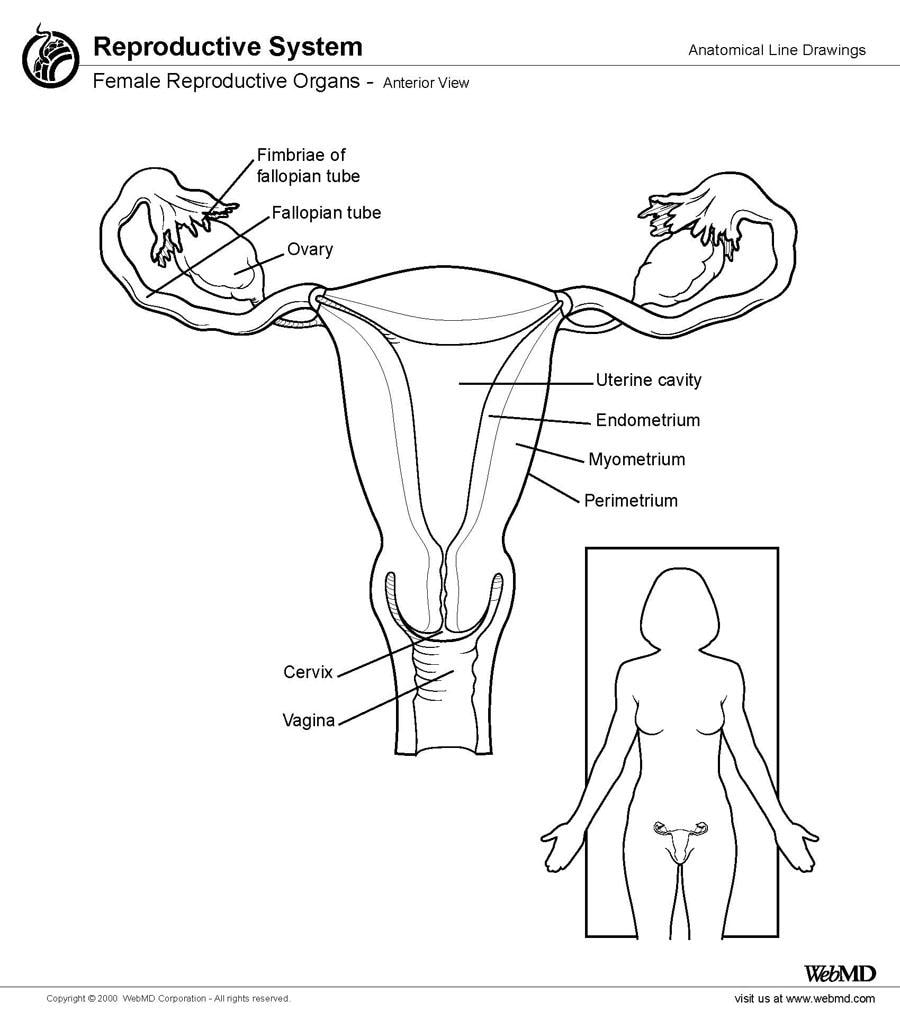 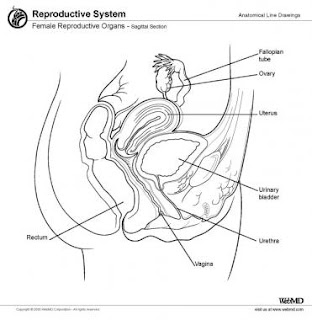 The vulva, also known as the pudendum, is a term used to describe those external organs that may be visible in the perineal area (see the images below). The vulva consists of the following organs: mons pubis, labia minora and majora, hymen, clitoris, vestibule, urethra, Skene glands, greater vestibular (Bartholin) glands, and vestibular bulbs. [1, 2, 3] The boundaries include the mons pubis anteriorly, the rectum posteriorly, and the genitocrural folds (thigh folds) laterally. 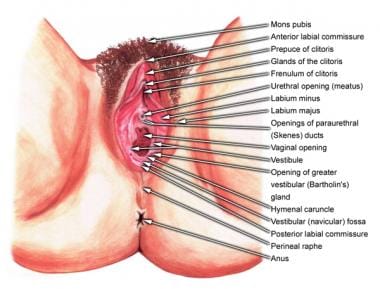 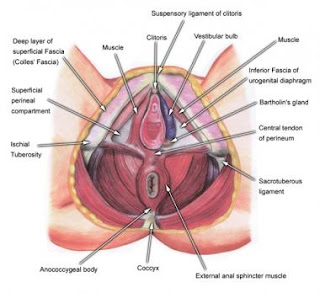 The mons pubis is the rounded portion of the vulva where sexual hair development occurs at the time of puberty. This area may be described as directly anterosuperior to the pubic symphysis.

The labia majora are 2 large, longitudinal folds of adipose and fibrous tissue. They vary in size and distribution from female to female, and the size is dependent upon adipose content. They extend from the mons anteriorly to the perineal body posteriorly. The labia majora have hair follicles.

The labia minora, also known as nymphae, are 2 small cutaneous folds that are found between the labia majora and the introitus or vaginal vestibule. Anteriorly, the labia minora join to form the frenulum of the clitoris.

The hymen is a thin membrane found at the entrance to the vaginal orifice. Often, this membrane is perforated before the onset of menstruation, allowing flow of menses. The hymen varies greatly in shape.

The clitoris is an erectile structure found beneath the anterior joining of the labia minora. Its width in an adult female is approximately 1 cm, with an average length of 1.5–2.0 cm. The clitoris is made up of 2 crura, which attach to the periosteum of the ischiopubic rami. It is a very sensitive structure, analogous to the male penis. It is innervated by the dorsal nerve of the clitoris, a terminal branch of the pudendal nerve.

Between the clitoris and the vaginal introitus (opening) is a triangular area known as the vestibule, which extends to the posterior fourchette. The vestibule is where the urethral (urinary) meatus is found, approximately 1 cm anterior to the vaginal orifice, and it also gives rise to the opening of the Skene glands bilaterally. The urethra is composed of membranous connective tissue and links the urinary bladder to the vestibule externally. A female urethra ranges in length from 3.5 to 5.0 cm.

The Skene glands secrete lubrication at the opening of the urethra. The greater vestibular (Bartholin) glands are also responsible for secreting lubrication to the vagina, with openings just outside the hymen, bilaterally, at the posterior aspect of the vagina. Each gland is small, similar in shape to a kidney bean.

Finally, the vestibular bulbs are 2 masses of erectile tissue that lie deep to the bulbocavernosus muscles bilaterally.

The vagina extends from the vulva externally to the uterine cervix internally. It is located within the pelvis, anterior to the rectum and posterior to the urinary bladder. The vagina lies at a 90º angle in relation to the uterus. The vagina is held in place by endopelvic fascia and ligaments (see the image below). 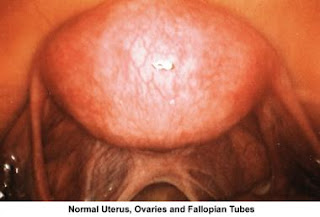 The vagina is lined by rugae, which are situated in folds throughout. These allow easy distention, especially during child bearing. The structure of the vagina is a network of connective, membranous, and erectile tissues.

The pelvic diaphragm, the sphincter urethrae and transverse peroneus muscles, and the perineal membrane support the vagina. The sphincter urethrae and the transverse peroneus are innervated by perineal branches of the pudendal nerve. The pelvic diaphragm primarily refers to the levator ani and the coccygeus and is innervated by branches of sacral nerves S2-S4.

The vascular supply to the vagina is primarily from the vaginal artery, a branch of the anterior division of the internal iliac artery. Several of these arteries may be found on either side of the pelvis to richly supply the vagina.

The uterus is the inverted pear-shaped female reproductive organ that lies in the midline of the body, within the pelvis between the bladder and the rectum. It is thick-walled and muscular, with a lining that, during reproductive years, changes in response to hormone stimulation throughout a woman’s monthly cycle.

The uterus can be divided into 2 parts: the most inferior aspect is the cervix, and the bulk of the organ is called the body of the uterus (corpus uteri). Between these 2 is the isthmus, a short area of constriction.

The cavity of the uterus is flattened and triangular. The uterine tubes enter the uterine cavity bilaterally in the superolateral portion of the cavity.

Rectouterine ligaments, lying within peritoneal folds, stretch posteriorly from the cervix to reach the sacrum. The round ligaments of the uterus are much denser structures and connect the uterus to the anterolateral abdominal wall at the deep inguinal ring. They lie within the anterior lamina of the broad ligament. Within the round ligament is the artery of Sampson, a small artery that must be ligated during hysterectomy.

The nerve supply and lymphatic drainage of the uterus are complex. Lymphatic drainage is primarily to the lateral aortic, pelvic, and iliac nodes that surround the iliac vessels. The nerve supply is attained through the sympathetic nervous system (by way of the hypogastric and ovarian plexuses) and the parasympathetic nervous system (by way of the pelvic splanchnic nerves from the second through fourth sacral nerves).

The vasculature is supplied by descending branches of the uterine artery, which run bilaterally at the 3 o'clock and 9 o’clock position of the cervix. The nerve supply to the cervix is via the parasympathetic nervous system by way of the second through fourth sacral segments. Many pain nerve fibers run alongside these parasympathetics. Lymphatic drainage of the cervix is complex. The obturator, common iliac, internal iliac, external iliac, and visceral parametrial nodes are the main drainage points.

The uterine tubes (also referred to as oviducts or fallopian tubes) are uterine appendages located bilaterally at the superior portion of the cavity. Their primary function is to transport sperm toward the egg, which is released by the ovary, and then to allow passage of the fertilized egg back to the uterus for implantation.

The uterine tubes exit the uterus through an area known as the cornua and form a connection between the endometrial and peritoneal cavities. Each tube is approximately 10 cm in length and 1 cm in diameter and is situated within a portion of the broad ligament called the mesosalpinx. The distal portion of the uterine tube ends in an orientation encircling the ovary.

The uterine tube has 3 parts. The first segment, closest to the uterus, is called the isthmus. The second segment is the ampulla, which becomes more dilated in diameter and is the typical place of fertilization. The final segment, furthest from the uterus, is the infundibulum. The infundibulum gives rise to the fimbriae, fingerlike projections that are responsible for catching the egg that is released by the ovary.

The ovaries are paired organs located on either side of the uterus within the mesovarium portion of the broad ligament below the uterine tubes. The ovaries are responsible for housing and releasing the ova, or eggs, necessary for reproduction. At birth, a female has approximately 1-2 million eggs, but only 300 of these eggs ever mature and are released for the purpose of fertilization.

The ovaries are small and oval-shaped, exhibit a grayish color, and have an uneven surface. The actual size of an ovary depends on a woman’s age and hormonal status; the ovaries are approximately 3-5 cm in length during childbearing years and become much smaller and atrophic once menopause occurs. A cross-section of the ovary reveals many cystic structures that vary in size. These structures represent ovarian follicles at different stages of development and degeneration.

Several ligaments support the ovary. The ovarian ligament connects the uterus and ovary. The posterior portion of the broad ligament forms the mesovarium, which supports the ovary and houses the vascular supply. The suspensory ligament of the ovary (infundibular pelvic ligament), a peritoneal fold overlying the ovarian vessels, attaches the ovary to the pelvic side wall.

Nerve supply to the ovaries run with the vasculature within the suspensory ligament of the ovary, entering the ovary at the hilum. Supply is through the ovarian, hypogastric, and aortic plexuses. Lymphatic drainage of the ovary is primarily to the lateral aortic nodes; however, the iliac nodes may also be involved.