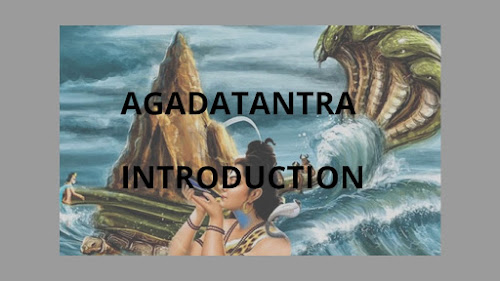 अगदतन्त्र - अगद + तन्त्र
अगद - अ + गद
गद - गद् + अच् प्रत्यय
Agadatantra word forms by the combination of  अगद and  तन्त्र.
Here, Gada means disease, discomfort, pain, poison or morbid conditions produced by any type of the poison (such as visha) , inhaled , absorbed, applied , injected or developed within the body.
Agada means the medicaments which are used as antidotes to combat these morbid conditions.
Tantra - tantra can be defined as
त्रायते शरिरंनेनेति तन्त्रं |
Means the science through which the positive health of an individual is preserved.
Agadatantra - The science 'Agadatantra' (Toxicology) which deals with the study of the poisons, their actions, their detection and treatment. 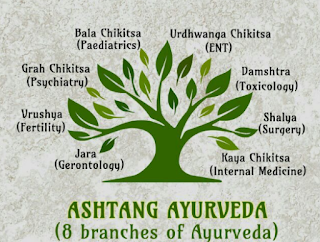 As the field of agadatantra is very vast, there is need to understand it in difficult aspect for which below described different parameters will throw light in the understanding of agadatantra field.
1.Classification - division,Subdivision,qualities etc
2.The character or nature of the poison.
3.Clinical features.
4.Diagnosis.
5.Management of poisoning care.

श्रीमद भागवत अनुसार :
For the sake of amrut , when demons and gods were churning the ocean (samudra amnthan-समुद्र मन्थान) before amrut , visha got originated, That visha made goda and demons angry and created sadness or depressed due to which they requested lord shiva to drink that ushna, tikshna and blue coloured visha. By valuing the request of gods when lord shiva started drinking visha few drops fell down in the earth, that visha was taken down by some animals and plants. However, sthavara and jangama visha originated.
According to Acharya Sushruta :
Like good and bad, day and night, light and darkness , visha and amruta, also have their origin from the same stem in creation like two diverse pages of the same leaf.
It is stated in the scriptures that a demon named kaitabha(कैटभ) out of his ego created obstructions in many ways during the creation of the cosmos by the originator Bramha. and at the time omnipotent god got very angry and ultimately resulted in the production of a very dreadful person who killed the demon kaitabha. Then the anger increased profusely and created sadness among gods. Soon after the completion of the creation; the creator Bramha casted the teasing dreadful anger (visha) into : sthavara and jangama vishas for the benefit of the creation.
According to Acharya Charak :
In the days of Yore, while the ocean was being churned by the gods and demons for obtaining ambrosia, even prior to the production of ambrosia, a ferocious-looking person who was respledent with aura, and who had four fangs, twany hairs and fiery eyes emerged (vishapurusha). the world become despaired at his sight because of which called visha or poison.

Visha Prabhava (विष प्रभाव- Effect of poison on the body) :

1. Visha after getting entered into the body the poison , immediately vitiates the blood simultaneously it vitiates tridoshas and its respective sites and at last proves to be fatal for an individual after getting entered into Hrudaya (heart).
.
2. The blood after getting vitiated by poison leads to tingling or pricking sensation all over the body, leads to red colour patches on the skin, sweating, horripulation, feeling of ants moving over the body , severe aches and pains all over the body, yawning, desire for food stuffs having cold potency.
The dominant or the potency of tridoshas also gets debilited and losses their potency by mixing up with the blood which gets vitiated by the poison, thus leading to the death or hampering of the health.
3. The poison first vitiates that specific dosha by which it is predominat( if poison is pitta predominance first it vitiates pitta dosha only), Where the poison gets localised (either in organ/seat) produces the disease first related to that organ /seat.
4. If the poison is present in the seat of Vata (vatashaya) produces diseases of vata as well as diseases of Sleshma(kapha). If the poison is present in the seat of Pitta (pittashaya) produces diseases of pitta and kapha, similarly it is present in the seat of Kapha (kaphashaya) produces diseases of kapha as well as pitta.
5. Among these, when the poison is present in the head, there is swelling of the head associated with appearances of rashes, especially seen around the eyes, lips, nose and mouth, tingling of the teeth, dryness of the palate, pain in the head, tingling inside the mouth; improper functioning of the sensory organs and stiffness(and Pain) of the lower jaw.

(A) According to Charaka :

(B) According to Sushruta :

Shanka visha - Doubt of being poisoned
In late dark night when if get pricked by thorn or due to some reasons got injured, If anyone gets doubt of got bite by poisonous insects, then also due to interference of mental poison some symptoms gets developed they are ;