Naturopathy – Development , Indian School – Panchabhutopasana, Relation of Ayurveda and Naturopathy and Its Importance in present era

The basic original idea of Nature cure is of Vedic origin in India where since antiquity was considered divine and all healing was attributed to the functions of nature. The original Hindus religion is really hall marked with the worship of Nature gods like Sun, Water, Air and Earth. The man recognized the role of these natural forces in substenance of life, hence a tradition of worship of nature gods became prevalent.
India, it appears, was much further advanced in older days in natural healing system than other countries of the world. There were references on India's ancient sacred books about the extensive use of nature's excellent healing agents such as air,water,earth and sun.
The Great Baths of the Indus valley Civilization as discovered at Mohenjo-Daro in old sind testifies to the use of water for curative purposes in ancient India.
Nature cure movement gained momentum in India as Mahatma Gandhiji(father of nation) became more interested in this system  and Included it in his programmes.

Theories as per Western School of Naturopathy -

Although the term 'naturopathy' is of relatively recent origin, the philosophical basis and several of the methods of nature cure treatments are ancient. It was practiced in ancient Egypt, Greece and Rome. Hippocrates, the Father of Medicine (460-357 B.C) strongly advocated it.
The modern methods of nature cure originated in Germany in 1822, when Vincent Priessnitz established the first hydropathic or 'water cure' (hydrotherapy) establishment there. With his great success in water cure, the idea of drugless healing spread through out the civilised world and many medical practitioners from America and other countries became his enthusiastic students and disciples.
Water cure is synonymous with nature cure in those early days. The credit of making water cure world famous goes to Vincent priestnitz (1799-1851). Dr. Henry Lindlahr and others go to the extent of crediting him as "father of naturopathy"

Panchabhutopasana-Relation of Ayurveda and Naturopathy : 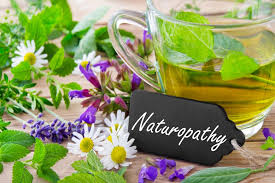 The material world is composed of five basic elements - ether, air, fire, water and earth. They represent the five fundamental qualities of matter. They are the physical moieties of all physical components of our body. Likewise they constitute the biological assembly of the entire animal and plant kingdom besides the inanimate.
The transient imbalances in the body can be restored to balance by appropriate consumption of five elements from nature following the law of Samanya and Vishesha i.e homologous vs heterologous.
Naturopathy believes that five elements approach is two-fold, firstly the balancing of bodily five elements by supplementing or depleting them by extra-bodily through food, drug, lifestyle as in Ayurveda. Secondly the five elements are also used in Naturopathy as purifying tools.
According to naturopathy because of hypo functioning Agni and ingestion of unwanted materials from polluted toxic materials get stagnated in the body.Because of their toxic and antigenic blocking effects those stagnated  toxic materials produce different diseases. This is the main cause of disease in Nature cure tradition and hence removal of toxins is the principle line of treatment
The principle medium and method of purification of stagnated toxins is through five elements like water, air, light, mud etc. there is no better medium than water for cleansing. Similarly there is nothing stronger than air and sunlight for drying and exhausting the impurities anywhere, in the body or elsewhere. Mud application is known to dissolve and absorb the toxins and cleanse the body to make it pure. Hence all the purifying therapies in naturopathy are compromised of water treatment, mud treatment and mud poultice, sun bath, air bath etc. Thus the five elements are important and fundamental tools of treatment in Ayurveda and Naturopathy.

Impotance of Naturopathy in present era -

'Naturopathy believes in the treating disease produced by nature by nature way'.

Yoga Prayojana and Ayurveda Yoga Sambandha-(Relation Between Ayurveda and Yoga)